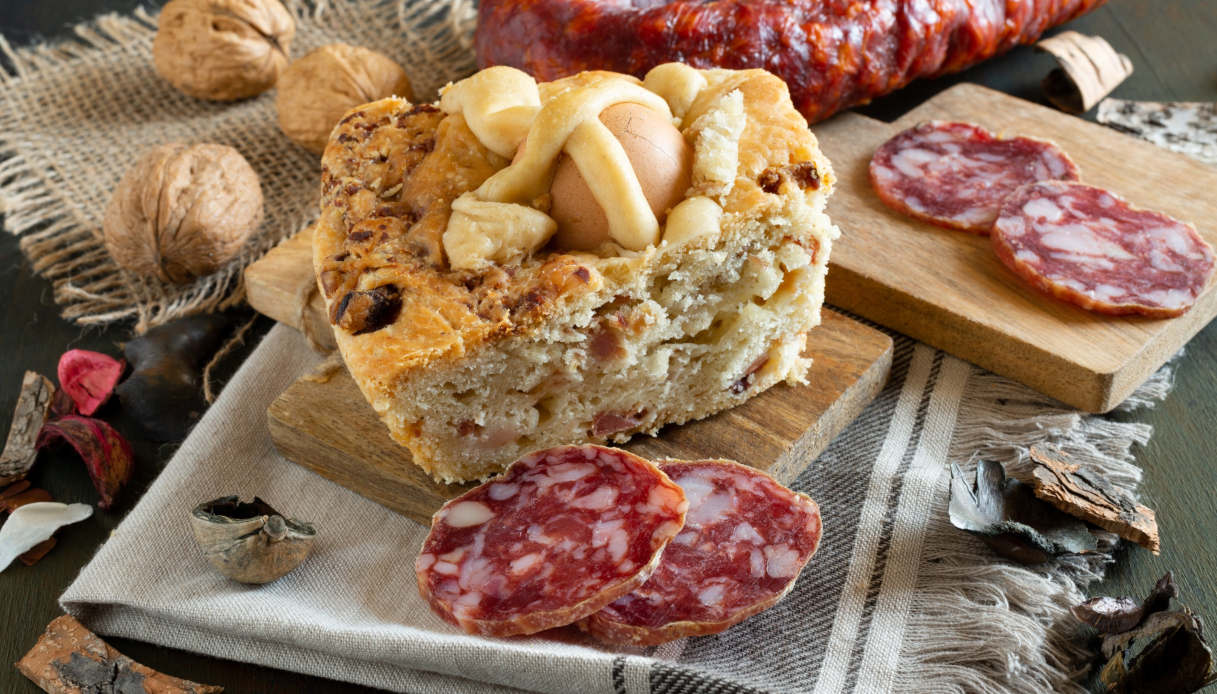 Il casatiello it is the typical rustic Neapolitan cake of the Easter period. Its origins are very ancient and date back to Greek and then Roman Naples. Tradition has it that the casatiello is brought to the table on Holy Saturday to then be consumed in the following days until it is finished on Easter Monday. However, it is such a good dish that it can be prepared all year round, even as a single dish for a tasty lunch break away from home.

How the casatiello was born

The casatiello has origins ancient: there are in fact several testimonies of bread “seasoned” with various ingredients already in the Greek literature. The name itself derives from caseus (cheese) and then Neapolitan “caso” which meant “small bread with cheese”. It was prepared in the pagan spring festivals in honor of Demeter (or Ceres for the Romans) on the occasion of spring.

The casatiello was then used for celebrate Christian Easterof which it has become a true symbol: in fact the circle of the donut represents both the crown of thorns, placed on the head of Jesus and the continuous cycle of life with the Resurrection.

In the 1600 the Casatiello, together with the Neapolitan Pastiera, makes its written appearance in a quote from Giambattista Basile in the fable “The cat Cinderella” describing the King’s festivities to find the maiden who had lost her slipper.

To prepare the casatiello we start with thedough of flour, yeast and water and, once ready, add the salt and pepper, continuing however to knead. At this point, the dough must rest for half an hour, so the dough must be incorporated a little at a time hungry and knead again. When the suet is well absorbed, the dough rests for another 1 hour, well covered.

After the first hour and a half, thedough is rolled out with a rolling pin to make a 1.5 cm high square, which must be large enough to contain the filling spread over the entire surface. A small part of the dough is set aside to make some strips which will be placed on top of the casatiello once filled with the favorite ingredients, cut into cubes of about 1 cm and arranged evenly on the surface of the dough.

Tradition has it that the pasta goes then rolled up and willing to donut in a round mold, you must then place 5 eggs on the top of the donut and form crosses on the eggs with the strips of dough.

The dough must rise for at least 4 hours into the donut, keeping it covered with a light cloth, until the dough slightly exceeds the edge of the mould. Once ready, bake for 30 minutes at 200°, then for 45 minutes at 180°. To understand if the casatiello is ready, you will have to hire an externally golden color and it must be dry inside.

The secrets for an excellent casatiello

There are no tricks or secrets for a casatiello to be prepared in less time, because it’s right there leavening to make a difference. It is therefore not advisable to use brewer’s yeast to shorten the times, but you can use sourdough which makes the casatiello softer and more digestible (although even longer to prepare).

The casatiello is preserved up to 6 days and it is delicious also (and above all) at room temperature, as per tradition, or after reheating it in the oven for a few minutes.

The variations of the casatiello

The most famous variant of the casatiello is the tortano. It can be said that the two recipes are actually related identical but the tortano foresees the use of hard-boiled eggs in the dough, while in the casatiello raw vegetables are placed on top of the dough. Furthermore, the tortano is not typical of the Easter holidays and in Campania it is prepared all year round.

A similar recipe but originally from Basilicata which is also used on the occasion of the Easter is the Lucanian cake, a unique dish based on ham, eggs and above all a wide variety of cheeses and dairy products.

Torta chiena, literally “full pizza”, is very similar to this last savory preparation typical rustic cake also from the Neapolitan tradition, which is prepared on special occasions but not necessarily.

Casatiello is known to be a dish that is not exactly dietetic, but there is a variant of casatiello light lighterprepared with leaner cured meats and, above all, with extra virgin olive oil instead of lard.

For a unique delicious dishjust change the ingredients to season the dish, as happens in the casatiello sausage and broccoli.

If, on the other hand, you are looking for an idea for one sweet breakfast with a bang or a tasty snack, why not try the sweet casatiello too? All you need are eggs, sugar, flour and flavorings and a decoration with icing and colored sprinkles.