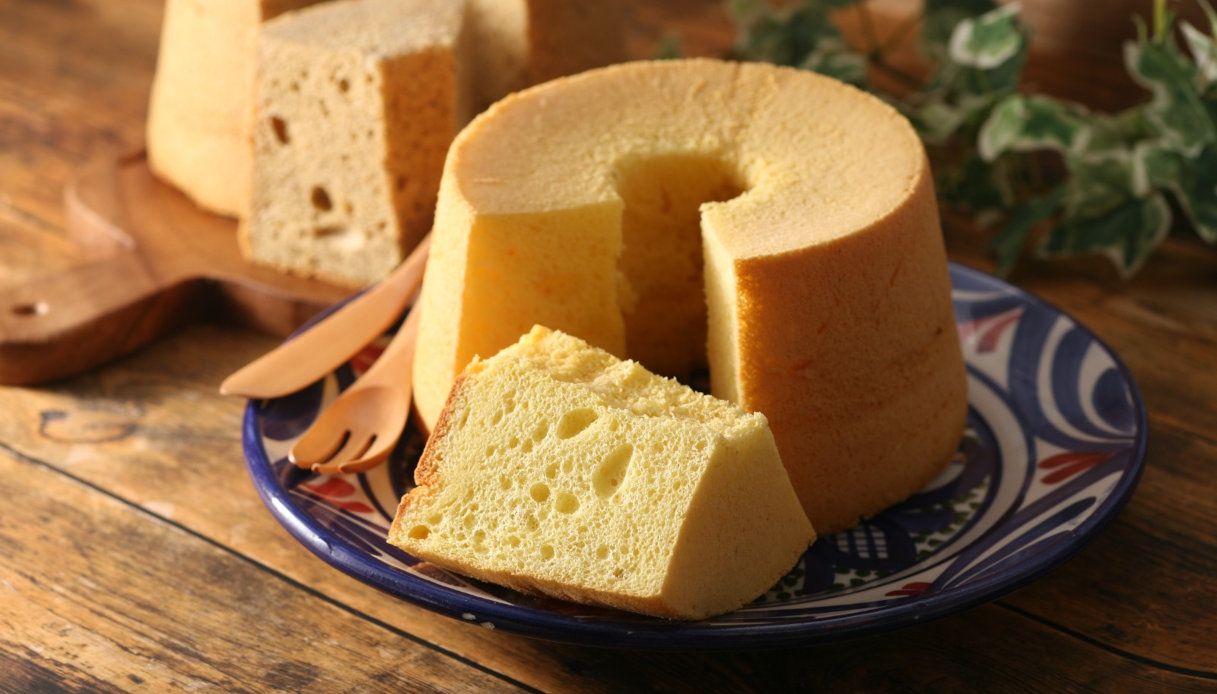 The chiffon cake is a cake of American origin, known for its softness and delicacy, whose name derives from the homonymous fabric, impalpable and very soft. It has a characteristic rounded shape, is very tall and smells of vanilla. However, there are many variations and it is possible to flavor it with many different perfumes. There’s no cream or icing that doesn’t go well with this cake, perfect for breakfast, a snack or as a dessert after lunch/dinner.

How the chiffon cake was born

The chiffon cake was created in 1927 and Harry Baker, who was in Hollywood in the 1920s as an insurance agent. But when he started working for a new restaurant called Brown Derby, on Wilshire Boulevard in Los Angeles, tried 400 variations, before finding his version of the cake he was looking for. Initially it was a fruit cake, with orange, grapefruit and apricot.

It was very successful in restaurants throughout Los Angeles, but for twenty years Baker did not reveal the secret of the softness of this cake, which was in the seasoning: not loving butter, because it was considered too heavy for a spontaneous and light leavening, he preferred to use theseed oil. In fact, at the time the cakes swelled either due to the whipping of the eggs or due to the use of butter.

Only in May of 1948 the secret ingredient of the Chiffon Cake was revealed in an article on Better Homes and Gardens, where the first published recipe studied by Betty Crocker. What was originally called Baker Cake became Orange Chiffon Cake and then simply Chiffon Cakelike the soft and impalpable fabric.

To prepare the chiffon cake, start by sifting flour and yeastto which is added the sugar, keeping 50 grams, the grated lemon zest, the vanilla seeds and the salt. At that point the ingredients are mixed creating a space in the center of the compound in which to insert egg yolks, water and oil.

With a whisk you have to mix everything until you get a smooth and lump-free compound, while you whip the album at room temperature (they must not be cold) by combining the Cream of tartar and then the remaining sugar, creating a thick white cream.

At that point, add the whipped egg whites to the mixture with a wooden spoon in three different phases, stirring constantly, then pour everything into a 24 cm chiffon cake mold and bake in a hot oven at 170° for about an hour.

Once ready, the cake goes up side down on a pastry board to let it cool for a few minutes, sprinkling a generous ration of icing sugar on it before serving.

The secrets for an excellent chiffon cake

For a creamy, lump-free result, it is advisable to use one extra fine sugar, the granulated one may not dissolve well, leaving grains of sugar in the dessert. The Cream of tartar instead it is a leavening agent that is added to egg whites to mount them until stiff. Furthermore, it raises the pH of the dough, which helps to obtain a lighter donut.

The most suitable trays for chiffon cake are those aluminum with removable base but not non-stick. You don’t need to butter and flour the mold because the cake needs to “cling” to the walls of the mold to remain very high, as required by the original recipe. For this reason, they are always found dough residue along the center funnel and along the edges of the mold.

To keep its shape and stay intact, the pan should be turned upside down after cooking while the cake cools to prevent it from collapsing. But above all it must be done chill for 3-4 hours at least before removing the bottom of the pan or attempting to detach it.

The variants of the chiffon cake

Chiffon cake is a very good cake in its simplicity, but in fact it represents a perfect base to decorate it or enrich it with other ingredients. For this reason there are many variations of the American recipewhich recall fruit as the origins or chocolate.

A chiffon cake detail the coffee chiffon cake is very tasty, a perfect energy boost for those who love the aftertaste of caffeine. Instead, one cake similar to chiffon cake is the coconut and chocolate cake, a dessert decorated with royal icing.