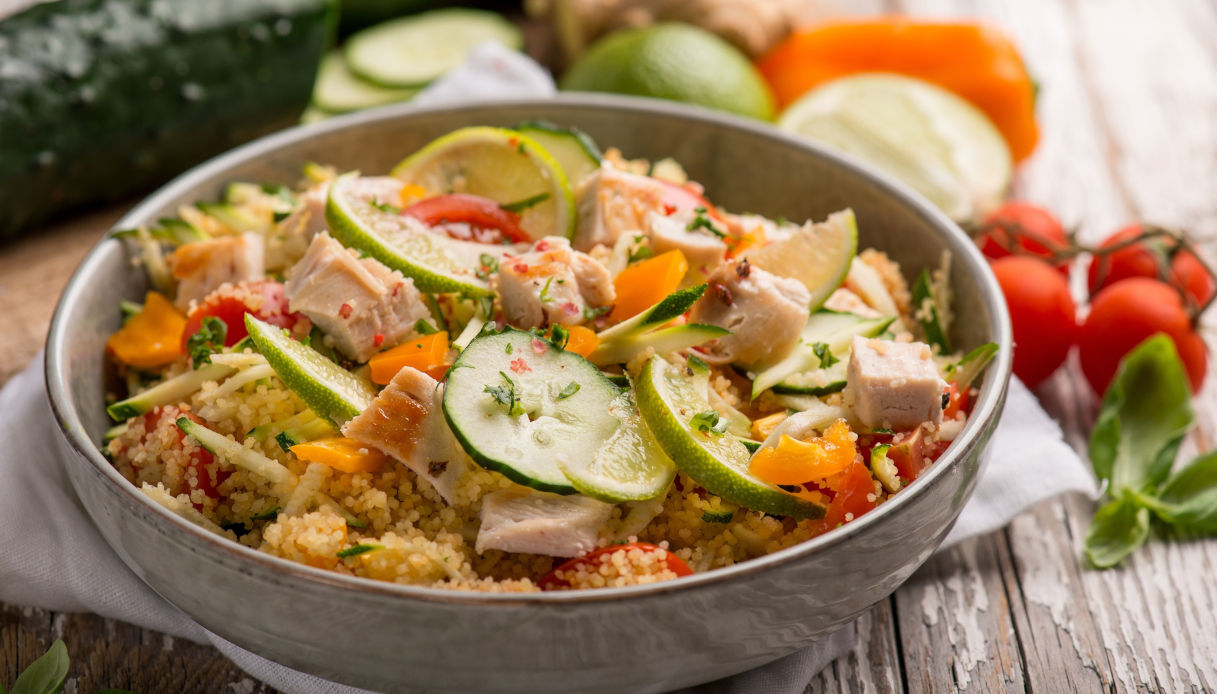 Il cous cous it is a typical dish of the North African tradition and in fact represents the basis of various dishes seasoned with ingredients of various types. The original and best-known couscous recipe calls for the use of mutton, semolina, onion, oil, salt, pepper and gravy. In any case, couscous is prepared on important occasions, even at home it is useful as a tasty lunch or for a dinner with African flavors.

How couscous was born

Couscous has an ancient history and its places of origin can be established between sub-Saharan Africa and the Maghreb coasts in medieval times. In fact, right here, archaeological discoveries dating back to the ninth century would have brought to light kitchen utensils for preparing couscous. Later, in the 11th century, the Arab-Islamic conquest contributed to the spread of the dish throughout the North African region.

The first Italian testimonies on couscous, on the other hand, date back to mid sixteenth century. The first to talk about it is Giovanni Battista Ramusio who, exactly in 1550, publishes the first geographical treatise of the modern age in which, in the chapter dedicated to Africa written by Giovanni Leone dei Medici, he describes the food customs of the Moroccan populations.

In particular, the couscous entered the Sicilian culinary tradition after the Arab domination and then spread massively in the nineteenth century, when the workers of the Trapani areas between San Vito del Capo and Mazara del Vallo began to travel to the Tunisian coasts exporting culture and tradition.

One of the best-known couscous recipes involves the use of mutton, semolina, onion, oil, salt, pepper and gravy. To prepare it, we start by cutting the carne into equal pieces, to season it with salt and black pepper and brown it for a few minutes in the olive oil together with the chopped onion. Everything must be flavored with pink pepper and harissa diluted in a little water, to which also add the tomatoes crushed and ceci previously soaked in cold water.

At this point, they should be washed and cut verdure into small pieces to combine them with the meat. At this point, add 2 liters of water and bring to a boil, then lower the heat. The couscous should be wetted with a little cold water and placed in the couscous pot without removing the grains.

Next, you have to pour the meat into the marga, place the couscoussier on top and cook for 30-40 minutes from the moment the steam begins to pass into the couscoussier. At this point, the couscous is placed on a plate, wetted with cold water and stirred with a fork to aerate it. Peel the pumpkincut it into small pieces and with the peppers put it in the marga.

Finally, just place the couscoussier on the marga again and let it cook for half an hour. Arrange the couscous on a earthenware plate, take a ladle of broth from the margherita and dilute the butter and ground pink pepper with a pinch of cinnamon. Once everything is mixed, you can arrange the meat and vegetables, sprinkle abundantly with the broth and let it rest for a moment before serving.

The secrets for an excellent couscous

Tradition wants couscous to be cooked in the couscoussierabut it can also be steamed, microwaved and in a simple pan, especially in the summer to replace rice and pasta.

Sometimes it can happen that you have a couscous with a sticky effect, with the grains not well separated. This could happen if the couscous balls have not been shelled enough, or if lumps form which, by spreading, form a too uniform whole.

To avoid this, you can add a spoonful of oil to the couscous and shell it with your fingers, greasing the grains as much as possible, taking a little in your hands and rubbing gently between your palms and fingers to let it fall. Only then should salted water, previously brought to a boil and removed from the heat, be added.

The variants of couscous

To try a cous cous particolare instead the cous cous with vegetables and figs is one of the most original, delicious and fragrant variants.

Couscous can also be seasoned with pesce: couscous with sardines instead includes peppers, onions and sardines.