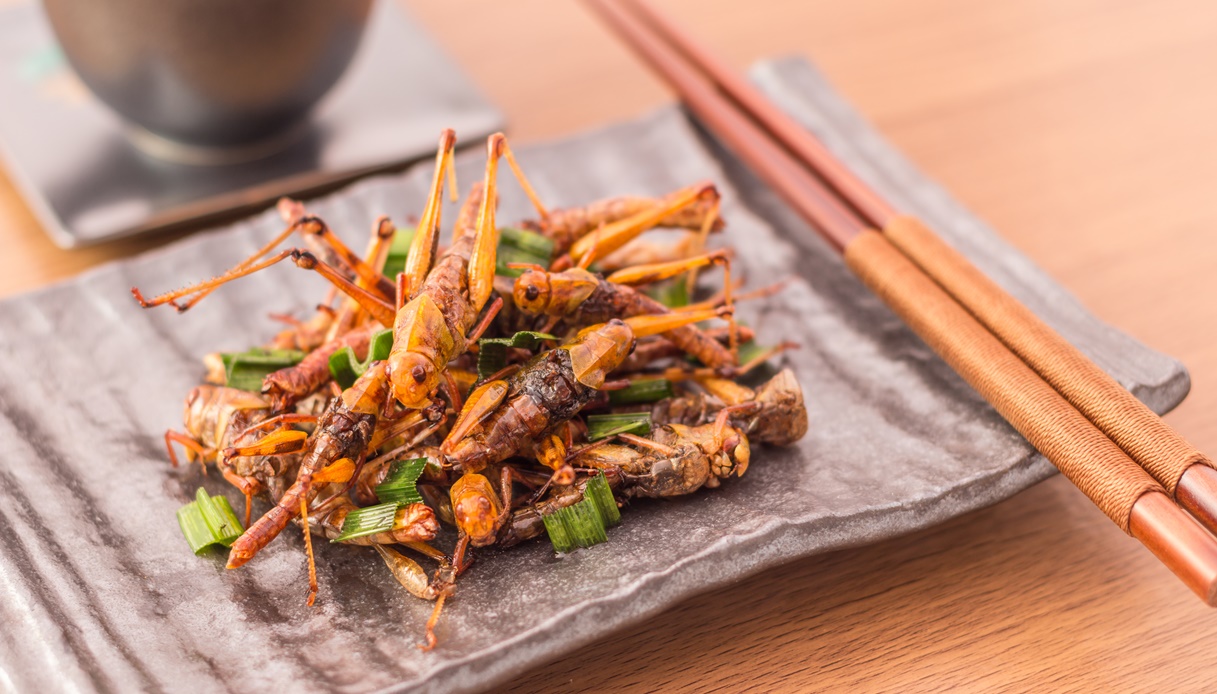 In one of the episodes of MasterChef 2023chef David Scabin said that the tradition evolves, even in the kitchen. The concept is very clear and you just need to study migratory flows, trends and historical events to understand that the gastronomic tradition it is the result of a lively and pulsating evolution. So here we have been talking about for some time now edible insectsOf cricket flour and of all these new ingredients which, apparently, they will become the kitchen of the future. One of the first questions that come to mind is: what are the insects we can eat? The answer is quite complex, but it cannot exclude a reflection. In many parts of the world, insects have been eaten for hundreds of years and it is insects that are part of a local gastronomic tradition that has its solid foundations in the history and territory of those countries. As always, Asia teaches us a lot and opens us up to new gastronomic horizons, but it is not the only continent to serve dishes based on crickets, locusts, worms and scorpions.

The news came just on January 24, 2023is that a law enters into force according to which the purchase of domestic cricket flour will also be possible in the European Community (Acheta Domestica). Already a year earlier it was possible to buy these dried insects to add to flour moths and at migratory locusts. It could therefore happen that in a short time, partly out of necessity, partly out of ethics, but also due to that creative evolution of which haute cuisine is especially hungry, to have bread, pasta and pizza based on these flours on your plate of insects.

The controversy, which has been active for some years now, is not long in coming and the supporters of the culinary tradition are worried about our gastronomic roots.

It’s about protein sources with low environmental impactfeed like a steak (often more according to the analysis of nutritional values) and to raise them a considerable amount of water is saved and there is one very low CO2 emission. In Italy, the real problem for now is supply and not demand, as one might think. In fact, small insect farms are unable to produce large quantities and for now the cost remains very very high.

What does anyone who has eaten edible insects say?

Although it may seem a distant reality, both in terms of space and time, in Italy there are already realities where it is possible to eat insects and their derivatives. We interviewed a person who attended an insect-based dinner and the answers were very interesting.

You ate at a restaurant that serves bugs. So are there places in Italy where you can already eat them?
No, technically I didn’t eat in a restaurant that serves insects, but I lived an experience based on insects, proposed by the first Italian reality to divulge the theme of insects on plates from different points of view. Giulia and Giulia – the two founders – organize dinners based on insects for a small group of people and by reservation. However, the first time I ate an insect in Italy was around 2018 when a cocktail bar in Milan accompanied one of its drinks with fried locust: not bad!

Did you already know the menu before going or did you discover the courses there?
I didn’t know the menu, because it’s a surprise but I had combed through the social media profile to find out something, to get some clues. Result: nothing I expected was served to me. So I would say a very good surprise.

How many courses were on the menu?
Appetizer, first course, second course, dessert. Obviously I tasted everything (and I also asked for an encore if necessary).

What did you eat?
The appetizer was bruschetta with cricket flour and red radicchio. The first course is a pumpkin soup with black cabbage chips and caiman “croutons” (my favorite insect of the evening). The second course egg in cocotte on a bed of spinach and three locusts to garnish. Dessert: a pear crumble with mealworms. All dishes have been delicious.

The peculiarity that immediately struck me was the approach: the insect was slowly revealed. It can be seen whole only in the egg and in the crumble, therefore after the appetizer and the first course. In this way the diners got “used” to eating them without particular traumas, first of all discovering their excellent flavor and only later did they have the opportunity to eat a whole insect with more ease.

What do insects taste like?
Insects have different flavors and tastes, after all mullet doesn’t have the same taste as sea bream and roast beef doesn’t have the same taste as sausage. The best peculiarity, the surprise, was realizing that within those proposals and those dishes, the flavor of the insects was perfectly in harmony as was the texture. I know, this texture thing might make some people turn up their noses, but… seeing is believing. For example, caiman tastes of cheese, cricket of little or nothing, but its flour is delicious. Insects are perfect for flavoring recipes and they really have familiar flavors inside the dishes.

How much did you pay for dinner? Does that seem like a fair number to you?
The cost of the dinner is 55 euros and includes, as mentioned above: appetizer, first course, second course, dessert, bread, water, a bottle of wine for every 3 people and coffee. The figure is right for food education which is no small matter: each dish is told, explained and each insect that is the protagonist of the dish has a story and very different characteristics and nutritional values. Here, therefore, I believe that net of what was eaten – and of what insects cost today, which in any case are not yet so common – the figure was right. You meet new people, new stories, experience a different evening than usual and eat something that would be difficult to try elsewhere.

Do you think insects can become ingredients in our traditional recipes?
I believe that insects can become ingredients in our recipes, push us to experiment and change some of our habits. I don’t think there can be room for insects inside tortellini Bolognese, but I think they could accompany other dishes. I can’t imagine them replacing the guanciale in the carbonara, but in recent years we’ve been seeing a lot of new things in the kitchen… certainly – considering their protein content – ​​finishing a carbonara dish with insects could be a titanic undertaking.

Did they explain to you why the world of food is moving more and more towards these “alternative” ingredients?
The key theme of this experience was “to those who ask us why eat insects, we answer: why not?” and in fact he does not make a crease. Furthermore, on a nutritional level – and I admit that I only discovered this at dinner – insects have enormous nutritional properties: their calcium content is comparable to that of milk, Omega3 to that of fish, iron to many vegetables, all with a reduced environmental impact: less greenhouse gas emissions, less water, less land. Raising insects would be a great solution for the environment and considering how much we hear about sustainability, it could be an easy way to go.

In your opinion, is it yet another trend that will die out in the short term or does it have a real future?
I’m not an expert on food trends, but I’m very curious and I must admit that for all the characteristics mentioned above, there could be a real future. I can’t predict when, but I think it will happen, after all the lobster has been mistreated for hundreds of years and is now one of the most prized crustaceans/foods.