Skip to content
Home
Italin cuisine
Kiwi: the health benefits and recipes to enjoy it 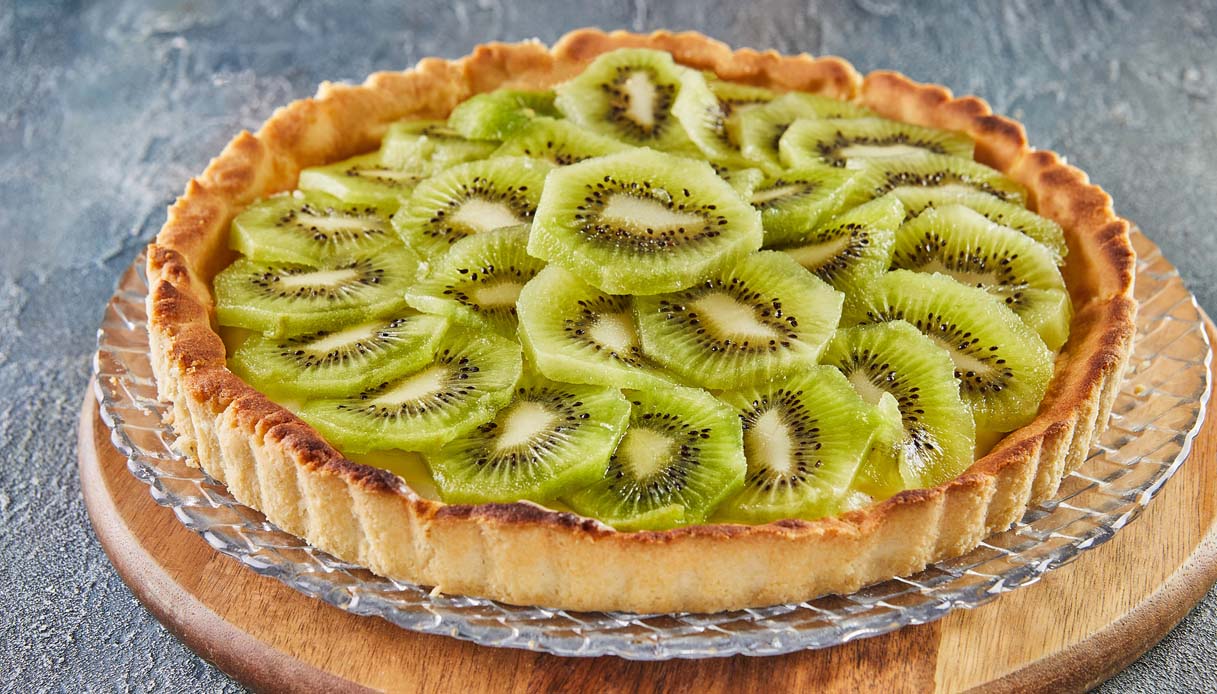 Did you know that one kiwi a day is enough for you to get all the vitamin C your body needs? This is just one of many benefits of this fruittasty but also very rich in nutritional properties which make it a truly precious food for your health and well-being. Find out why it’s good for you and the best ones recipes with kiwi to make the most of its positive effects.

The kiwi is the fruit of a climbing plant, theActinidia Chinensis, from the same gooseberry family, originally from China and then imported to New Zealand, where it took the name of “kiwi” in honor of the country’s symbolic bird. It has also been cultivated in Italy since the 1980s and has oval and elongated fruitscharacterized by a hairy brown skin and from one firm and sweet pulpgreen on the outside and white on the inside, where there is a crown of small dark seeds.

Actually, even if the green kiwi is the most famous, there are also other varieties obtained through research and selection programs. Among these is the yellow kiwi, characterized by a golden pulp and a sweeter and less sour taste. But there are also bicolor kiwiswith green and red or yellow and red streaks.

Beyond the chromatic characteristics, and with small differences from one variety to another, the kiwi is a fruit with such a precious patrimony of nutrients that it can be considered a natural supplementa small but powerful and very tasty ally of well-being and health.

The nutritional properties of kiwi

Kiwi is one of foods that contain more vitamin Ceven more than oranges, famous for their richness in this nutrient: 100 g of kiwi gives you 85 mg.

Kiwi is also a real mine of potassium and, even in this case, beats what is generally considered, wrongly, the fruit that contains the most, the banana: 100 grams of fresh kiwi provide 400 mg of this mineral salt, against the 350 mg of bananas.

This fruit also stands out for its very high content of water e fiber (2.2 mg per 100 grams)as well as being rich in substances antioxidantsin particular of carotenoids such as lutein and flavonoids, such as quercitin and naringenin.

Kiwi is also one of the few fruits they bear chlorophyll, a pigment used by plants to convert sunlight into nutrients through photosynthesis. The chlorophyll molecule, which is responsible for the green color of kiwifruit, contains magnesiumwhich together with calcium and phosphorus enriches the rich baggage of mineral salts of the kiwi.

The green color of the kiwi also testifies to its richness folic acid, or vitamin B9. All with a very low energy intake: 100 g of fresh kiwi contains 49 calories.

The benefits of kiwi

The richness of vitamin C that characterizes the kiwi makes it very useful for strengthening the immune system, but not only. This vitamin also plays aantioxidant action which counteracts the harmful effects of free radicals and protects us from many diseases linked to cellular ageing, from cardiovascular diseases to tumours. A positive effect to which the many antioxidants that the kiwi contains also contribute.

Vitamin C also stimulates the collagen productiona protein that is the main constituent of tissues, so eating kiwifruit is also important to protect youth and health.skin elasticityto promote the wound healingfor the health of blood vessels, teeth, bones, cartilage, tendons and ligaments.

The abundance of potassium, essential mineral salt for proper functioning of muscles, including the heartand for the transmission of nerve impulsesmakes the kiwi a fundamental fruit for regulate heart rate and blood pressure. But it also makes it a sports allybecause with potassium it helps to counteract the onset of crampsespecially during intense physical activity, while thanks to magnesium it contributes to normal energy metabolism and to reduction of tiredness and fatigueas well as the proper functioning of the nervous and muscular systems.

Kiwi is also an excellent source of fibres, especially insoluble ones, which promote the intestinal regularity and the sense of satiety.

Finally, the presence of folates makes this fruit very beneficial too pregnantto promote the proper development of the fetus and protect it from the risk of malformations.

Have you understood how many positive effects you can get with a simple kiwi?

In addition to many benefits, kiwis also have contraindications which in some cases make eating or abusing them not recommended. As Humanitas points out, they are rich in oxalatessubstances which, if taken in too high quantities, they can favor the formation of stones. If you have kidney problems, eat them in moderation.

Also, who is it allergic to natural latex it should avoid consuming kiwis because he may suffer from latex-fruit syndromean example of cross allergy which, in people allergic to this substance, can cause disturbances even after the consumption of some fruits such as kiwis.

The peel? It’s possible to eat!

Did you know that in addition to being delicious and full of beneficial properties, kiwi is also a anti-waste fruit? The peelwhich is generally eliminated, you can eat, indeed it is precisely there that many of the beneficial substances are concentrated that the kiwi contains, such as fiber and vitamin C. The advice, therefore, is to eat this fruit without peeling it, washing it under running water to eliminate as much as possible the hair on the surface. Alternatively, if you can’t tolerate the hairy skin of traditional kiwis, try the baby kiwia type of miniature kiwifruit with small fruits like a berry, sweet and completely peel freeperfect to eat whole.

Recipes with kiwi, the sweet fruit that goes well with savory too

Kiwi is great to eat alone o along with yogurt and dried fruit for one snack hunger breaker. You can also enjoy it with other fruits in macedonia or in the form of smoothies and milkshakesor use it to prepare tasty fruit skewers fresh mist.

Even in the kitchen it is a versatile ingredient that lends itself to the creation of many recipes, both sweet and savory. The taste of him, in fact, goes perfectly with many ingredients.

Among the most appetizing mixes are those with fish and shellfish such as swordfish, prawns, scampi and crab, with meats such as pork, chicken and turkey, with cured meat such as raw ham, bresaola and mortadella, with soft cheeses such as stracchino and goat cheese. And, of course, with others exotic fruits eat mango, avocado and papaya.

So many pairings that you can enjoy experimenting in an infinite number of dishes, from pasta al risottogive her salads ai paninigive it antipastilike ours bruschetta with swordfish carpaccio and kiwihave dessert.

Of course, in fact, with this fruit you can also prepare a lot desserts delicious, come on cake of the kiwi at the jamdal ice-cream up to Bavarianas well as using it as an ingredient for drink fresh and energizing.

Did you want to explore the potential of this fruit in the kitchen? Discover the others kiwi recipes in the “Ingredients” section of Buonissimo.