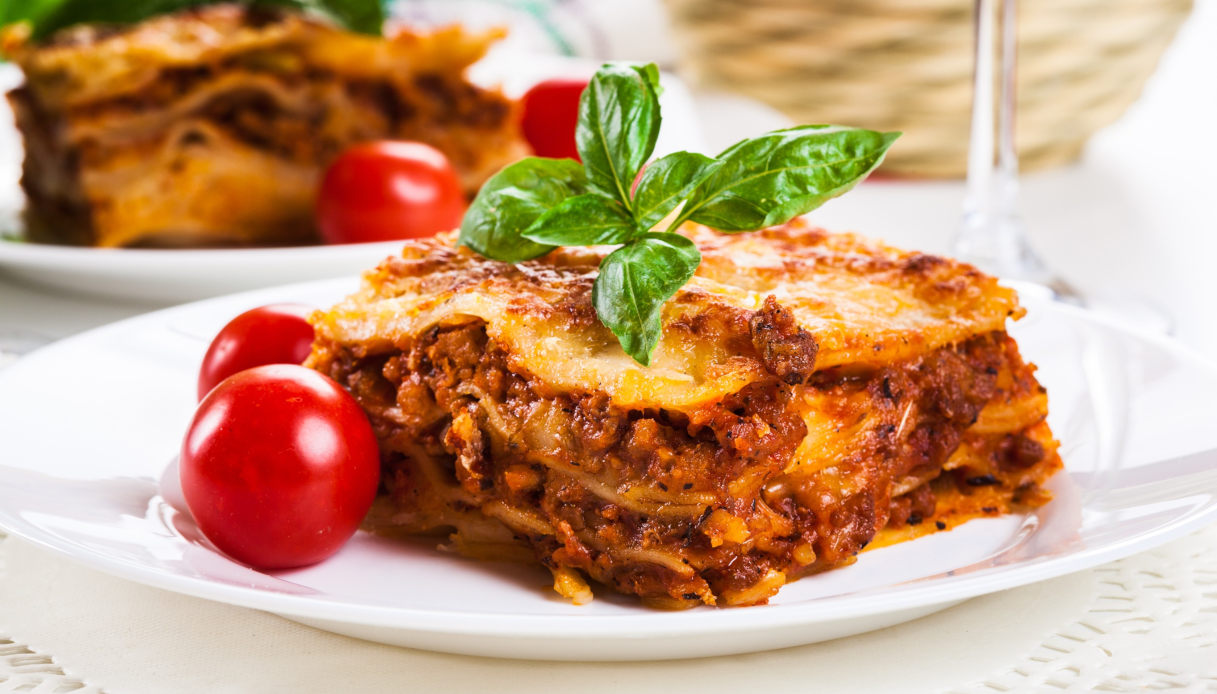 The lasagna Bolognese they represent one of the most famous Italian recipes in the world (and also the most copied). A delicacy of Bolognese origin that has met with resounding success, a full-bodied and important dish, cooked for a Sunday lunch or during the holidays. They can be prepared with ready-made sheets from the supermarket or follow the original recipe and prepare the sheet by hand. However they are prepared, they are always delicious!

How lasagna alla bolognese was born

Lasagna has a very ancient history, there was even talk of lasagna already in Roman timeswhen, with the Greek term “laganon” and the Latin “laganum”, they indicated square or rectangular sheets made from a dough of wheat flour, cooked in the oven or on the fire and stuffed with meat.

The layered versionis actually being documented for the first time in 1863 with “The cookbook” of the century. XIV published in Bologna by Francesco Zambrini, who spoke of lasagna similar to the current ones. Instead, the place of origin is indicated by Paolo Monelli in his “The wandering glutton” of 1935 where he attributes the paternity of the recipe to the “Bologna innkeepers”.

The recipe for lasagna alla bolognese includes three main preparations: the browseil ragout and the bechamel. Although they are all ingredients that can be found ready-made in the supermarket, the original recipe calls for them to be prepared by hand. It’s not difficult to make them, but it takes some time, which is why, to prepare them in advance, it is possible to buy both the sheets and the béchamel already ready.

So let’s see the preparation of the ragout: in a casserole you have to fry the onion, celery and carrots in a little oil. Once the vegetables are wilted, add the minced pork and beef, then brown well and deglaze with white wine. At this point you can add the tomato puree seasoned with salt and pepper. The ragù should be cooked for at least an hour on a low flame.

Once the ragù is ready, let’s start there preparation of the tray: spread a spoonful of béchamel and one spoonful of meat sauce on the bottom of a baking dish, cover with the fresh egg pasta and start again, sprinkling, however, with Parmesan up to the last layer. Bolognese lasagna is cooked in the oven at 180° for 30 minutes.

The Bolognese recipe also includes the pancetta in the sautéed which must be sweet and not smoked, while for the carne pork should be used for the fat part and veal for the lean part.

In some cases, in the last layer of pastry, there are those don’t put the tomato but only the béchamel and the Parmigiano Reggiano: this creates a very tasty crunchy crust. Instead of Parmesan, however, it is possible to put taleggio or fontina, according to your tastes.

Lasagne alla bolognese can be kept for a long time for 3 days in the refrigerator, if closed inside an airtight container or covered with transparent film. They can also be frozen.

There are a great many variants of lasagna alla bolognese, even without meat: in lasagna with vegetables, for example, there are yellow, green and red peppers, aubergines, spring onions and courgettes, broccoli, peas and carrots. Even in spinach lasagna meat is missing, but they are no less tasty for this!

In some cases the puff pastry is even replaced: look for one tasty lasagna is it different than usual? The carasau bread lasagna is truly original!

Why not try some instead fish lasagna? You can choose between salmon lasagna and clam lasagna!