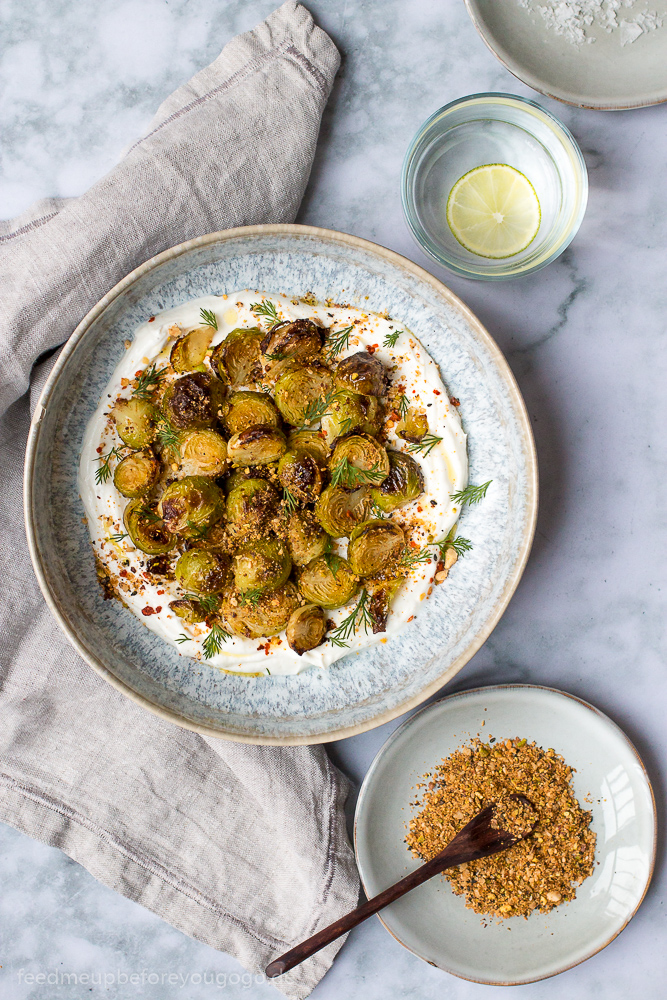 Oven-roasted Brussels sprouts meet homemade labneh, along with some fresh dill, chili and the nutty dukkah spice mix, and you have a light winter dish that almost feels like summer.

We’re fed up with winter. Tired of the monotonous gray veil that covers Berlin between November and March? Then turn on all the lights from 3 p.m. so that you don’t sit in complete darkness or almost petrify from the cold if you air the room for 5 minutes. What helps right now is looking forward to spring, planning trips to warmer climes and good food. A dish that celebrates a winter vegetable, but at the same time is so light and summery that it almost tastes like sun, sea and vacation: roasted mustard sprouts with labneh and dukkah.

Oven-roasted, slightly crispy Brussels sprouts marinated with mustard, honey and olive oil are the star. Resting on a velvety soft bed of labneh, he’s delighted to be joined by dill, chili and dukkah – a spice blend of nuts, spices and herbs. Labneh, the cream cheese from the Levantine cuisine, is very easy to make yourself from yoghurt, because it only has to drain overnight in a sieve lined with cheesecloth to lose liquid. If you don’t feel like it, just use a very creamy Greek yogurt with a high fat content.

Also Dukkah, a nut-based spice mixture originally from Egypt, is ready-mixed and keeps for several months in an airtight container. The recipe makes a medium-sized jar that you can put in the pantry. The spice mixture is worth its weight in gold because it pimps up any kind of vegetable dish or salad in a matter of seconds and goes wonderfully with it, for example colorful winter vegetables from the oven. 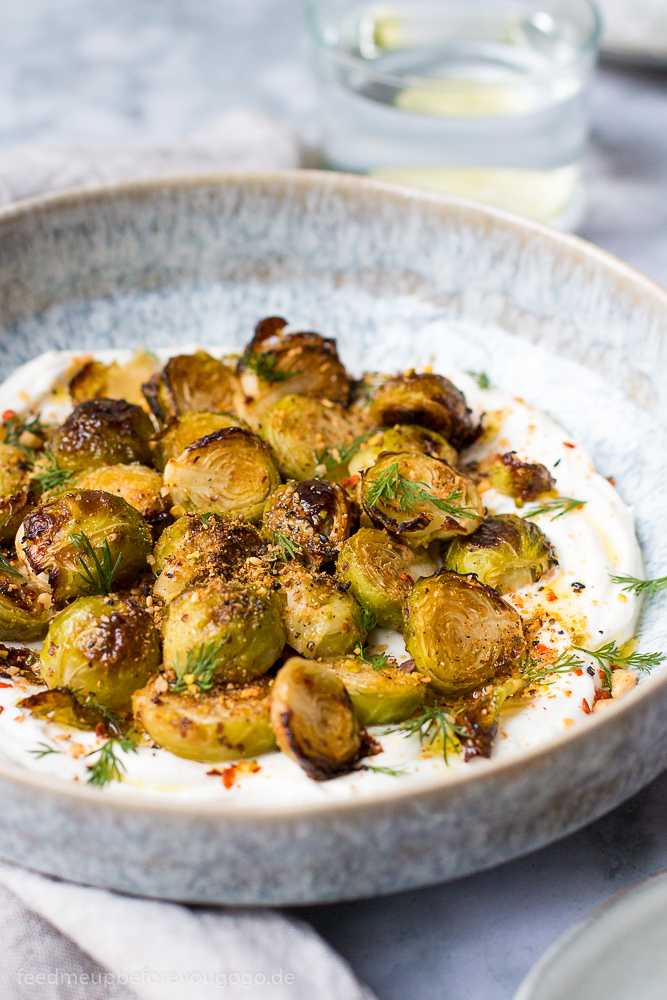 After winter salad with raw Brussels sprouts, apple and parmesan chips and the Orzo Risotto with Pumpkin and Roasted Parmesan Brussels Sprouts we also attack in this winter round of the Food blogger seasonal calendar “It tastes better seasonally” back to Cauliflower. If someone had told us a few years ago that we would love to cook with Brussels sprouts, we wouldn’t have believed it. The little green cabbage has actually rolled itself into our hearts and often ends up on our plates in winter – not only as roasted mustard Brussels sprouts with labneh and dukkah. Roasting in the oven remains our favorite method of preparation. This makes the Brussels sprouts crispy on the outside and gives them a slightly bitter, nutty roasted aroma. You can find out which seasonal vegetables the other food bloggers have put at the center of their winter dishes in the list below. 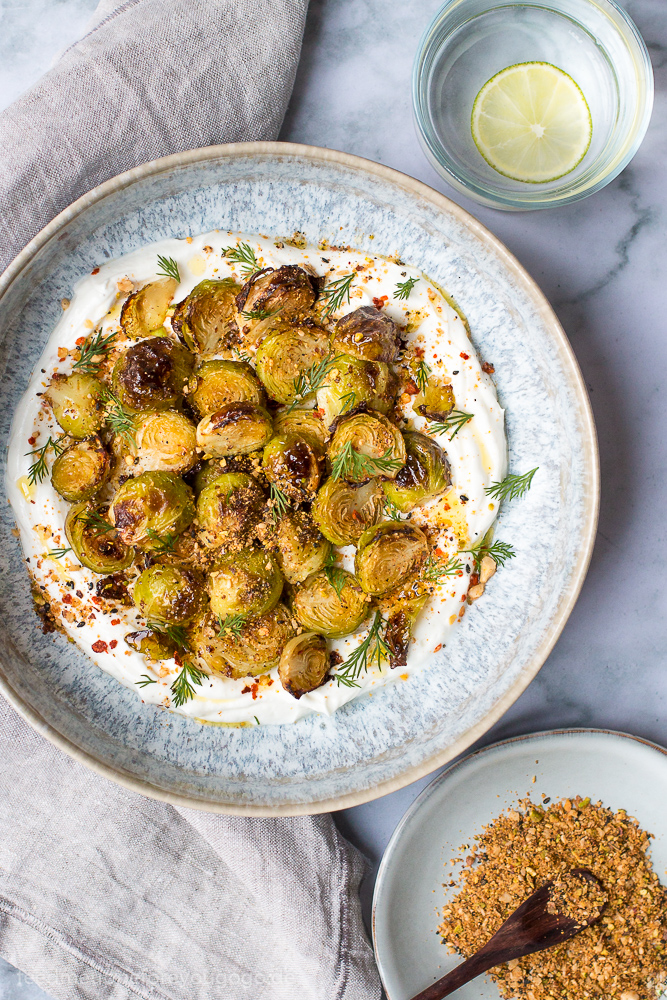 Roasted Mustard Brussels Sprouts with Labneh and Dukkah (recipe for 2) 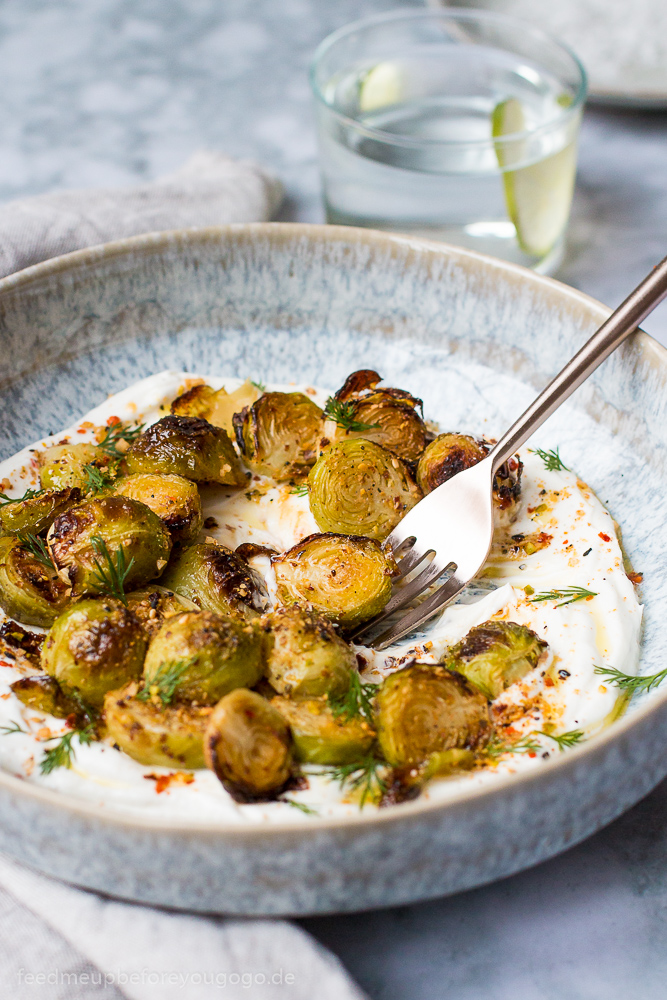 Here you will find an overview of all the food blogs participating in the campaign that offer seasonal winter recipes Brussels sprouts, kale, leeks, red cabbage, beetroot, carrots, turnips, savoy cabbage, mushrooms, chicory, lamb’s lettuce and other types of vegetables have considered: