Buttery, flaky and with a velvety filling: These are Rugelach with walnuts and currants. The small filled croissants come from Polish-Jewish cuisine and are easy to make yourself thanks to the uncomplicated fake puff pastry.

While the man was on a study trip in an outrageous 27 °C Israel stays, the stove is fired on in Berlin. Not only because the temperatures are slowly getting uncomfortable and I probably won’t be able to delay turning on the heating for much longer, but also because the daily photos and stories from Israel make me incredibly jealous. Hummus and Sabich, Jerusalem Bagels, Shakshuka, and then all the sweet little things. Above all rugelach – small stuffed croissants originating from Polish-Jewish cuisine. It is fortunate that I recently featured a recipe for “heymische rugelekh” – homemade rugelach – in Laurel Kratochvila’s wonderful book “New Baking” stumbled. She fills the cones with a mixture of cinnamon sugar, ground and chopped walnuts, and raisins. Sounds perfect, I just replace the raisins with currants. Rugelach are a popular pastry especially on the Jewish holidays of Hanukkah and Shavuot and come with a wide variety of fillings – with nuts, poppy seeds, plum jam or chocolate, but also dried fruit, tahini, marzipan or cinnamon and sugar. I would love to try them all, but for now I’ll settle for the nutty-fruity one Walnut Coriander Filling. I was skeptical at first, because I’m actually not the biggest fan of raisins and currants in pastries, but I’m blown away by the little Rugelach – they’re absolutely addictive!

The basis of the croissants is a slightly sour cream cheese dough or milk puff pastry, as Laurel Kratochvila calls it. In fact, its texture is similar to regular puff pastry, but it’s much easier to make—a lightning-fast fake puff pastry, so to speak. The Rugelach are wonderfully buttery and flaky and taste best when they have cooled completely. Then they are slightly crispy on the outside and the nutty-sweet filling is velvety connected. And best of all: They are still wonderfully fresh and buttery even after 3 days.

I’m sure that the filled walnut croissants are also excellent as Christmas pastries during the Advent season … just saying. 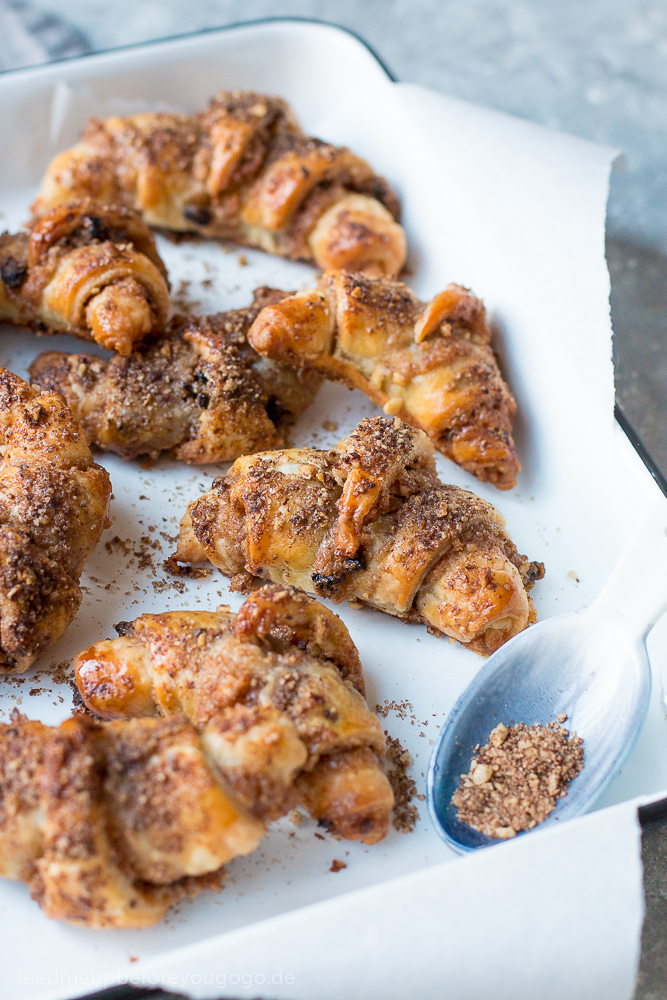 Rugelach with walnuts and currants (recipe for 24 pieces)

ingredients for the filling *Note/Advertisement: For the one with an asterisk